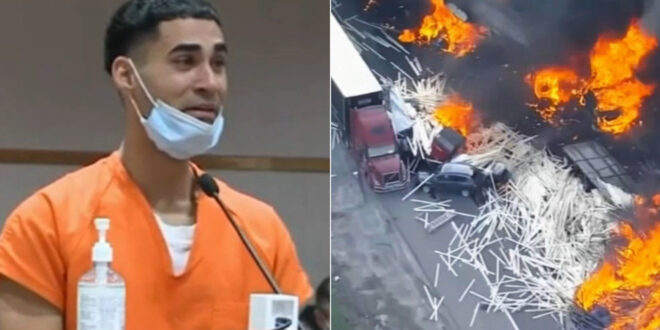 The unfortunate colorado truck driver case might be one of the most controversial case for the state’s judicial system. What’s your take on it? Read more here typestrucks.com.

Back in 2019, a tragic accident caused by a colorado truck driver occurred. The driver was unintentionally crashed into stopped traffic and caused chain collision which killed four people and caused injuries to several others. The unfortunate event also damaged about 28 vehicles. The main cause of the accident was because Rogel Aguilera-Medero, who was a Houston-based truck driver colorado lost control of his semi-truck vehicle due to brake failure. Aguilero-Medero explained that he was unable to move his vehicle to the nearby runaway truck ramp as it was already difficult to control the vehicle.

He claimed that when he descended the slopes and lost control of his brakes, crashing into oncoming traffic and starting a massive fire, he attempted to put his lorry into gear. For almost 24 hours, the highway had to be closed in both directions due to the accident. Please keep in mind that the colorado truck driver had no prior criminal records, nor he was found guilty for drinking or consuming drugs as there’s no alcohol and drag substance found in his blood. In other words, the colorado truck driver accident was nothing but an unfortunate incident.

To everyone’s surprise (including the victims’ family), Aguilero-Medero was sentenced 110 years of prison by the court. A jury convicted Mr. Aguilera-Mederos guilty on 27 charges in October, including vehicular assault and homicide. Invoking a Colorado state rule that mandated that terms for each count be served consecutively rather than simultaneously, District Court Judge A. Bruce Jones sentenced Mr. Aguilera-Mederos, who was 26 at the time, to more than a century in prison on December 13.

This of course caused public’s uproar. The decision sparked many protests, even some celebrities such as Kim Kardashian West also took part in the colorado truck driver protest. Over 5 million people have signed for a petition and urged Polis to commute Aguilera-Mederos’ sentence. They believe that the original sentence was too much, and even longer than life sentence. Especially, since the accident he caused was purely unintentional. Even the convicted break into tears and plead to the judge to give him some leniency.

To show their disagreement to the judge’s decision, many truck drivers raised a voice. The action was recorded and shared in a TikTok video that went viral. It showed several fleets parked right at the Colorado state line. Apparently, the drivers are holding a colorado truck driver boycott in which they refuse to commute inside Colorado until the judge reconsider the sentence fell upon their fellow trucker.

The colorado truck driver boycott has successfully gained public’s attention, and they have different opinions. Some of them actually supported the movement, as they were also disagreed with the sentence pulled by the judge. Some others think that the boycott action is a bit too extreme and overdone. Also, they think that the action done by truckers might affect goods supply to and outside Colorado and might affect the economy.

Amidst the colorado truck driver protest, Gage Evans, the widow of William Bailey, who perished in the collision, stated in an interview that Mr. Aguilera-Mederos “should spend some time in prison and ponder about his conduct” as the petition gained support. She continued, “We are really the victims,” and added that she thought Mr. Aguilera-Mederos had “made horrible judgments along the way in that unfortunate day.”

The deaths were first attributed to Mr. Aguilera-Mederos by the prosecution due to a number of decisions he made while operating the vehicle, such as failing to guide the truck carrying timber onto a runaway-truck ramp that was present alongside the roadway.

James Colgan, a lawyer for Mr. Aguilera-Mederos, stated that “we’re not saying he’s innocent and didn’t make mistakes” but that “the punishment has to fit the crime, and this punishment does not fit the crime” before formally requesting a commutation, which would lessen the prison sentence but not overturn the conviction. Aguilera-Mederos himself tearfully stated that he was feeling deeply sorry for the victims and how he wished that he was the one who was taken away instead of the victim.

Many people also stated that the colorado truck driver accident’s sentence actually highlight more serious issue that need to be addressed. That a racial disparity between white people and colored-people are still happening. Some of them brought back the case of Ethan Couch who killed 4 people due to drunk driving and he was only given 10 years sentence and additional 720 days in jail for violated his probation time. The convicted even able to fled the country.

The ongoing colorado truck driver protest also gained attention of several lawmakers. The League of United Latin American Citizens (Lulac) president, Domingo Garcia, described the verdict as “a blatant miscarriage of justice.” Aguilera-Mederos, a Cuban immigrant, was represented by Lulac in a letter to Polis asking for a pardon or a sentence reduction, and Garcia went to Colorado to speak with the governor.

It’s not until the Colorado governor, Jared Polis stepped down and intervened to reduce Aguilera-Mederos 110 years of sentences. Rogel Aguilera-Mederos’ sentence will be commuted from 110 years to 10 years, Jared Polis stated on Thursday. The 26-year-old would be eligible for parole after five years under the increased sentence. The action was taken at the same time as Mr. Polis released more than 1,300 people from prison for marijuana possession charges involving two ounces or less. Two more persons had their sentences commuted by him.

Polis responded by writing a letter to the convicted truck driver colorado, “I am writing to notify you that I am granted your request for a commutation. “I think there are a number of reasons why I should pardon you. For a horrific but accidental conduct, you received a sentence of 110 years in jail, which is essentially more than a life sentence”.

So, what do you think about this colorado truck driver case? Do you think he truly deserved the 100 years? Share your opinion below!