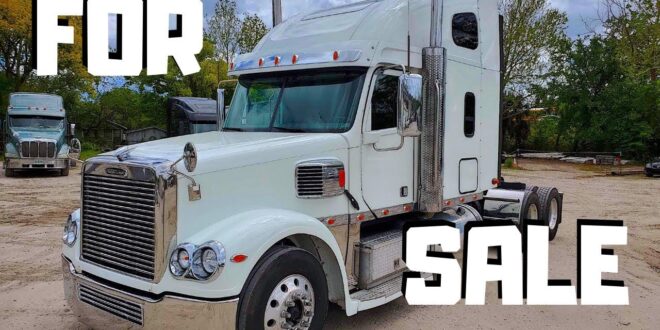 Will You Still Find Glider Trucks for Sale? Check Here!

While it’s highly useful, you might won’t find any gilder trucks for sale in the near future. Read below to find out about the reason.

Gilder trucks are probably one of the best thing ever exist in trucking history. You might have or have not heard about this vehicle. A glider truck or glider kit is the most affordable solution for small fleets and owner operators to remove an outdated, unsafe vehicle from the road and replace its primary components with a more modern, secure chassis with more advanced safety features. Due to EPA’s newest regulation, you might not be able to see many glider trucks for sale everywhere. Will you still find the vehicle easily these days? And even when you do, what kind of perks you can get from it? Find the answer here at typestrucks.com!

Now before you try to find glider semi trucks for sale, reading about its history will enrich your knowledge about the vehicle. Glider Kits have been in use for about 50 years and have a variety of uses, both on and off the road. Gliders are more affordable than new trucks and provide fleets and owner/operators with a more cost-effective option. Due to the fact that many trucks used used parts that weren’t rebuilt, gliders initially had a negative image. Twenty years ago, no one really thought about providing customers with a better product. In 1989, Fitzgerald Glider Kits set out to alter that opinion. It didn’t take too long until other manufacturers followed their path, such as Peterbilt, Kenworth, and more.

Where Can You Find Glider Trucks for Sale

During its golden era, glider trucks are produced massively by many manufacturers. One of the most popular ones are Kenworth and Peterbilt. However, not long after EPA passed their new regulations, the companies decided to discontinue the glider trucks’ production. There don’t seem to be any choices for owner-operators or small fleets to obtain a glider kit trucks for sale three years after emissions laws went into effect in January 2018 and significantly limited the production of Class 8 glider kit trucks. That also applies to truckers who wish to construct and assemble their own glider trucks, who must purchase their desired glider trucks for sale directly from truck manufacturers or dealers.

The Phase II tractor-trailer emissions laws, which went into effect in 2016, not only hindered the output of builder-sellers like Fitzgerald, Ervin’s, and Harrison’s, but they also caused major truck manufacturers to completely stop selling glider bodies in recent years. Two of the most popular kit assembler glider alternatives, Freightliner and Peterbilt, stated this week that they no longer offer gliders at all, not even to people, much less to businesses that were mass assembling such kits to sell. Peterbilt stopped manufacturing glider kits since 2019, and some people even find difficulties in finding used peterbilt glider kit trucks for sale. Same thing happened to truck enthusiasts who were desperately looked for kenworth glider trucks for sale.

Kenworth glider trucks for sale in particular were widely sought. is a truck that maintains its history as a long-haul vehicle close to the trucking industry’s origins. The Kenworth W900’s traditional appearance and modern technologies are what make it such a popular truck with fleets and owner operators alike. Kenworth redesigned its lovely and cozy inside without skimping on quality. Anyone will like driving this truck. A truck that transports you back to the glory days of trucking may be created by taking everything that makes a Kenworth W900 wonderful and making it even better by fitting the same truck with a Pre-emission Detroit 60 series engine.

Meanwhile, used peterbilt glider kit trucks for sale also had their own loyal fans. Peterbilt 389 Glider Kit is a tribute to the glory years of trucking. Words like “powerful,” “reliable,” and “versatile” are just a few used to describe the 389. The performance of this vehicle is unparalleled thanks to the pre-emission technology under the hood and its unmistakably vintage appearance. It’s quite sad that you’ll have to say goodbye to this truck in 2023. This glider truck come in 3 variants, the 389 day cab, 389 flat top, and 389 raised roof. The Kenworth glider kit trucks for sale are available in 5 types: Kenworth W900 Day Cab, Kenworth W900 Ext Day Cab, Kenworth W900 Flat Top, Kenworth W900 72” Aero, and lastly Kenworth W900 86” Studio.

Truck buyers might pick a glider-based truck over a more traditional new or used model for a variety of reasons. Some drivers favor older engines because they believe they offer better fuel efficiency and dependability than newer power sources, but they would want these engines to be mated to a body made of more modern parts. A glider kit trucks for sale’s price is also less expensive and, in some situations, tax-free than buying a comparable new truck. These elements have led to an increase in glider truck sales in recent years.

Despite its controversy, glider trucks proved to be helpful to truckers. Many even willing to go extra miles to obtain glider semi trucks for sale. Here are numerous advantages you can obtain from this vehicle:

So, what’s your own opinion about glider trucks? Would you prefer to buy glider trucks for sale or choose other type of trucks to get the job done instead?