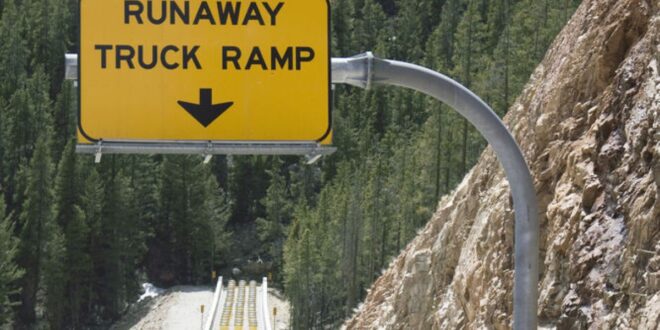 what is a runaway truck ramp

What is A Runaway Truck Ramp?

What is a runaway truck ramp? For a motorists it might mean nothing. But for truckers, it means everything. Find out why below at typestrucks.com!

What is A Runaway Truck Ramp?

What is a runaway truck ramp? In order to find out, you might want to look for word ramp meaning and runaway truck separately. Based on Oxford Languages online dictionary, ramp meaning is a slope or inclined plane for joining two different levels of entrance. Meanwhile a runaway truck means a truck who can’t control its speed due to brake failures. This usually happen in places where truck usually operate in high speed, such as highways, or at a place where they have to use brake frequently, such as mountainous or hilly terrains.

To sum it about what is a truck runaway ramp, a runaway truck ramps are predetermined emergency locations that use sand, gravel, or wire netting to quickly slow down a large truck if the brakes fail. The majority of these ramps seem to be freeway exit ramps that end in a dead end. Some variants utilize gravity by swiftly accelerating the vehicle up a steep slope to resist the falling force. The majority of the time, truck escape ramps are situated in areas where the truck’s brakes are frequently applied.

What is The Purpose of a Runaway Truck Ramp?

If you ask further about what is a runaway truck ramp for, that should be very obvious. To answer the question of what is the purpose of a runaway truck ramp, you can trace it back to its history back in 1960. Highway officials reportedly began exploring for solutions to reduce runaway truck accidents beginning in the 1960s. There isn’t much information available before 1980. However, according to an NHTSA report, there were 2450 runaway truck occurrences in 1981. These figures show that heavier-than-truck drivers frequently exceed the posted speed limit.

The problem is that downshifting is not a viable option for managing a semi’s speed when traveling down a steep incline due to the non-synchronized transmission. In that circumstance, the truck can only be slowed down using the brakes. However, when the load is full, the brake system is under a lot of pressure for about 80,000 pounds, to be exact. The issue of brake fade gets exacerbated when you accelerate downhill. When a driver’s brakes completely fail, the situation can quickly spiral out of control. So, what is the purpose of a runaway truck ramp? For short, the ramp is used to restrain the uncontrollable speed of the truck to prevent fatal ram accidents that might caused large-scale casualties.

Now, you might have already figured out what is a runaway truck ramp for. But, don’t you know that there are various type of runaway truck ramps? When partial brakes fail, it makes sense to utilize it in reverse because gravity is usually the culprit. “Gravity escape ramps” are steep gravel ramps that run off and up along the side of the road near the bottom of a steep descent. In mountainous places, this kind of runaway truck ramp is most frequently employed. The truck may be stopped fast because to the gravel and the steep incline.

You might also heard about sand pile ramps, and wonder what is a runaway truck ramp made of sand? These type of runaway truck ramp usually consist of sand heaps placed on a short ramp a on less steep gradients to slow down fast trucks. And you can’t help but to wonder what is a runaway truck ramp made of gravels? It’s called arrester bed ramps, which is a short runaway truck ramp usually used on minimal grade slopes. It’s also as efficient as the sand ramp to halt the truck’s speed. Near the start of the ramp, stainless-steel netting was positioned across the street. This design is comparable to the idea applied on aircraft carriers to aid in preventing planes from landing. This type of ramp is usually called mechanical-arrester ramps.

Fun fact: Not every ramp slopes uphill. Some stretches alongside the road on fairly flat ground. Some others located into the center. Runaway truck ramps frequently have concrete barriers lining the sides as well. They provide additional support for stopping and keeping the truck upright as well as helping to keep out-of-control trucks on the ramp. As you may expect, using a runaway truck ramp can result in some harm. Additionally, even if the truck doesn’t topple over once it has stopped, there is no other way to move it off the ramp but with a tow.

In the United States, there are over 200 runaway truck ramps. The majority of them are, obviously, located in the hilly western states. States take into account the following when deciding where to put a runaway truck ramp:

How to Efficiently Use a Runaway Truck Ramp

Having a break failure is a stressful situations. Especially for truckers who drive big trucks through downhill road. First of all, you must remain calm. Although we admit, that might be a struggle. Engage the jake park in order to slow the truck down. Jake ramp is particularly useful when the service brake doesn’t respond. In addition to preventing unmanageable speeds, this will also make navigating slower traffic somewhat doable. allowing you to quickly identify your truck’s escape ramp.

After you found your runaway truck ramp, your truck as centrally as possible. The huge stopping power that is about to occur requires you to maintain the wheel as steadily as you can as you reach the sand or gravel incline. After the dire situation is under control, assess your situation. Particularly if you bring hazardous or flammable materials.

Contact your dispatcher and let them know about the situation, so that they can send you the emergency helps that you need. Don’t forget to turn off your truck, gather your necessary paperwork and get out of your cab. Wait patiently until the dispatcher team arrive.

So, that’s all you need to know about what is a runaway truck ramp. Hopefully you’ll get the information to face emergency situation while driving your truck. Knowing about how runaway truck ramp works, and how to make it work will help to save lives while you’re on the road.

Share
Previous Used Commercial Trucks for Sale by Owner
Next The Best Truck Stop with Showers Near Me! 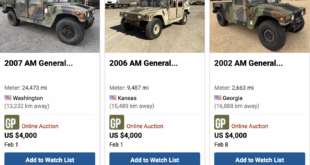